Photos courtesy of The Dilly Dally

Bringing back The Dilly Dally corner market is Lisa Garst’s dream. And in the first part of 2020, the store and gathering place that dates back to 1910 is due to reopen as an anchor of the South Salem community.

Garst entranced listeners in a full room at the Salem Museum Monday night and again Tuesday at First Christian Church in South Salem as she took listeners along on the adventure she and husband Reid Garst are taking to make the long-shuttered Dilly Dally live again.

Kids riding their bikes alone with their buddies to the DD, as Lisa Garst frequently refers to it, was a rite of passage. Children bought Rocky Top sodas and 25-cent candy.

The Garsts bought the Dilly Dally at the corner of Eddy Street and Front Avenue in October 2018. Ever since, they and construction crews have been uncovering its history, prepping the floors and walls for new life, and at times, literally shoring up the building.

“Since we bought the Dilly Dally, it’s all been a blur,” Lisa admitted, explaining how they replaced broken water pipes, fixed rotten boards, replaced floor joists and made the floor solid “for the next 100 years.”

They left the floor creaks, though, because they thought the sound was cool. It’s one of many former customers’ favorite memories of the DD, as shown on the Dilly Dally Facebook page.

The Garsts hadn’t been prepared for how badly damaged the floors and walls were from termites and a leaking roof in the connected retail space that will become the ice cream parlor.

But that’s all been fixed and as much as possible of the original floor has been pieced and redone on that side, she said. That was after she showed images of what was under the vinyl flooring and plywood: open holes left by carpeting fused to the wood by mold and decay.

They saved and reused as much as possible. Hardwood floors in the market portion of the building were relatively undamaged and now gleam once more. Original walls and shelves were cleaned and repainted.

Volunteers from a First Christian Church’s Men-U built a new front counter for the store out of an old door and shiplap siding from the building.

Lisa researched the original green paint on the exterior of the DD, and Sherwin Williams calls the custom blend “Dilly Dally Green.” It took paint “and about 300 gallons of caulk,” she said.

The original rising design in the front windows was painted yellow and became the inspiration for the DD’s logo and motto on the T-shirts – available at dillydally.com. The back of the shirts has the motto: Spread Some Sunshine.

The Garsts have also created a Sunshine Fund. Lisa said 10 percent of sales of all logo apparel will be donated to a different charity each month, she explained.

What the market plans to sell are household supplies, grab-and-go sandwiches, snacks and drinks, “and night crawlers on the general store side,” she said, referring to live fishing bait worms. “We plan to offer healthy snacks, too,” Lisa explained.

The Roanoke River is right around the corner as is the Roanoke Greenway. The DD is counting on not only neighborhood traffic but cyclists and hikers on the greenway and coming from the river, she added.

The ice cream parlor will sell Ashby’s Sterling Ice Cream. The Garsts learned about that brand while visiting a store in Natural Bridge. The name is meaningful to them because Sterling was the name of their former business in Salem they sold in 2018, and their only child is daughter Ashby.

“The ice cream is awesome,” she promised. “High fat, lots of sugar.”

In order to dip ice cream and serve other food, Lisa went through ServSafe certification. It’s just one of the new experiences she had as a result of rehabbing the DD.

According to Lisa, J.R. Maxey (also listed as Massey in some sources) built the building. It was sold to RT and Rindy Overby who ran it from 1910-1935. In 1943 the business sold to J.J. Ludwick (or Ludwig), then was conveyed to June Ludwick Moore by her sister, Mary Jane Faris, in 1972. After her death, the property was held for the last nine years by a bank until the Garsts, under the name Still Waters, purchased the property.

Roger McNulty operated the Dilly Dally the longest of any, 25 years. He purchased the business from his brother. The name, Lisa said McNulty claimed, was because “That’s all people did there – dilly dally.”

The McNultys didn’t own the building. They only leased it, and hence, were not allowed to make improvements, Lisa said. “So we will be the first owners and operators in over 60 years,” she added.

Because of the building’s age – over 100 years – and the basic architecture being unchanged, the Garsts applied for and received from the City of Salem historic designation, which made it possible to restore the building without having to comply with flood plain requirements.

To see more about the rebirth of The Dilly Dally and follow its progress, see the Facebook page and website, dillydally.com. Although Lisa would like to open before the end of this year, she told audience members at the Salem Museum it is more likely to be early spring. 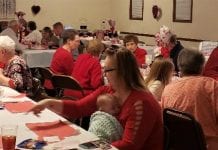 Local Chick-fil-A restaurant is closed, but not for long 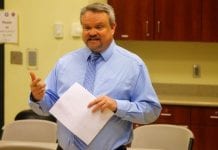 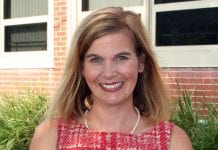