At Tuesday night’s Salem School Board meeting, a variety of employees from each school, as well as individuals from both the central office and the transportation division, were honored with the award for support staff member for the 2015-16 school year.

The award was established in 2014 to honor employees (other than teachers and administrators) who are an integral part of their respective school’s successful operation, but often times fly under the radar or operate behind the scenes.

The school board expressed their appreciation and gratitude for all that the award winners do for their schools, as well as the students that they help.

Regina Meredith, a counselor at Salem High School, was also recognized at Tuesday’s meeting for being named a co-recipient of the 2015 Counselor of the Year Award by the Virginia Counselors Association. The VCA is a non-profit organization dedicated to meeting the needs of Virginia counselors, and is a branch of the American Counseling Association.

Meredith is highly respected in Salem and across the region. She was the Roanoke Area Counseling Association Member of the Year in 2014 and was the Salem high school teacher of the year in 2012.

Meredith is known for going above and beyond, doing whatever it takes to help students succeed. In addition to her regular duties, Meredith has also been mentor cohort leader for new teachers since 2007, participated in the Salem schools leadership academy since 2008, and was the president of the Roanoke Area Counselors Association last school year. She was at the forefront in the application of credit accommodations for students with disabilities at Salem high, which has allowed many students to graduate with a standard diploma.

The next Salem City School Board meeting is scheduled for Tuesday, Dec. 8. 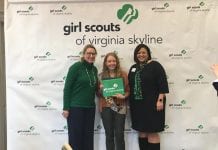